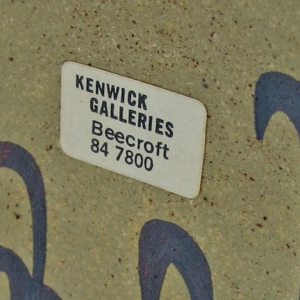 I thought it might be useful from time to time to feature a gallery that has played an important role in the promotion and selling of Australian ceramics.

The Kenwick Galleries in Beecroft, NSW, was established in 1969 by potters Joan Beaston and Billie Brown. The name Kenwick came from the names of their husbands, Ken and Wickham. The gallery was initially above Sparks Shoe store in Wongala Crescent. Shortly after it opened, it was taken over by Pat Ashford and Dawn Fitzroy who moved it to 14a Hannah Street. In 1989, the business was sold to Barbara and Don Furnass, Judith Taylor and Marilyn Chivers. In 1994, it was moved to Shop 8, The Module, 16-24 Hannah St, Beecroft. In 1996, Barbara and Don Furnass retired. In 2007, Judith Taylor and Marilyn Chivers also retired and the business was closed.

This information comes from Time’s up for gallery (2007). Northern District Times, 20 June. Illustrated: image on Flickr by Identifying Australian Pottery member m a D of a mystery pot with the Kenwick Galleries label.

Throughout its thirty-eight years of operation, the gallery provided craft artists and painters from NSW and interstate with a venue for displaying and selling recent work.  Advertisements in the Sydney Morning Herald Archive identify the following potters whose work was sold there, but there would have been many more: