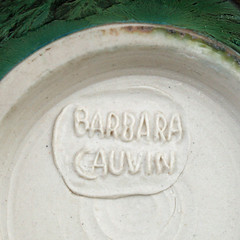 April was a particularly beautiful month this year in Bemboka and the gallery cats and I spent as much time as possible in the garden. Group members were also busy on other projects.  Thus during April we added only 18 new topics, although with some interesting names among them. I always like to make family connections so I followed an entry on Barbara Cauvin with one on her daughter Simone Fraser. We finally found examples of Kevin Grealy’s mark with the help of new member ceramiccraze. I continued my work on ‘W’ – finding two potters of the same name – and also wrote up what we know so far about Cowra’s Japanese Garden Pottery.

Here are the topics added or substantially updated in April 2014: