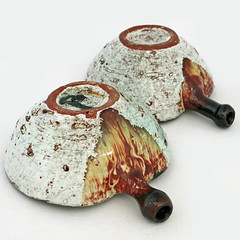 During May, we added 25 new topics. More mysteries were solved through hard work by members and we found a pottery club with its own impressed mark. I added entries for Ron Rowe and Jan Twyerould after personal contact during the month. As a background project, I began adding linked entries to B potters in Australian Potters Marks. This led me to the Boyds and I spent some time drafting entries for members of this extended family and their associates. The Early Australian Pottery group  also includes the Boyds within its scope. Luckily as we use the same platform, it is easy to share images between the two groups. The Boyds also belong to the Art world so I’m glad we now have a record of their craft origins in Australian Potters’ Marks. The Guy Boyd and Martin Boyd potteries were substantial commercial businesses in Melbourne and Sydney and this also needed to be documented. Slip-cast works signed ‘Martin Boyd’ or ‘Guy Boyd’ were factory-made and the author Martin Boyd never made pottery.

Illustrated: John Perceval’s painted ‘P’ mark on one of a pair of ramekins.

Here are the topics added or substantially updated in May 2014:

One thought on “May’s new topics”