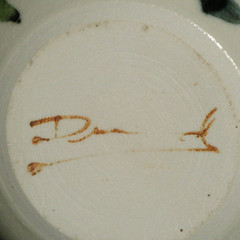 A number of new members joined the Identifying Australian Pottery group in June and we were busy welcoming them and helping them to find their way around Flickr. Twenty-four new topics were added, mainly through members’ finds. (All that is needed for a potter to be added to Australian Potters’ Marks is for us to know the state in which they practiced and to have an example of the mark.) We got in touch with Trudi Fry and were able to confirm that her name is spelt with an ‘i’ and that works signed ‘Trudy’ could not be hers. I  was kept busy on gallery business during the month but found time to do a little more work on B. A Hilary Barta vase that David and I had recently acquired for the gallery provided an example of her mark, allowing me to add an asterisked topic for one more potter from the Fusions Permanent Collection. Incidentally, Fusions has now changed its name to  Ceramic Arts Queensland.