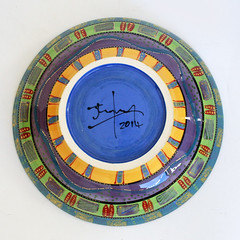 In September, we added 16 new topics and significantly updated the entries for Geurt Bout and Yarra Glen Pottery. I was reminded of the importance as a resource of Ceramics in South Australia, 1836-1986 : from folk to studio pottery / by Noris Ioannou (Adelaide : Wakefield Press, 1986) after images of some works by Geurt Bout were posted on the Facebook Australian Pottery group. This group has almost 1,000 members now. It deals mainly with earlier Australian pottery but there is some overlap with our project. An Australian Studio Pottery Collectors group has also been set up on Facebook. Our members contribute to both these groups and it is wonderful to see knowledge being shared across both platforms. The new information on Yarra Glen Pottery came from Anthony Durro, who worked at Yarra Glen from 1988-1998. He had posted reminiscences of that time in recent issues of the Western Suburbs Clayworkers Newsletter. Amongst the new topics, we confirmed Ray Blaber’s identity through a paper label posted on Facebook. I was also contacted during the month by the son of our mystery pottery Rowe, now identified as Ian Rowe of Rowe’s Hill Pottery.

Illustrated: Janette Loughrey’s painted signature on one of her brightly coloured bowls.

Here are the topics added or significantly updated in September 2014: