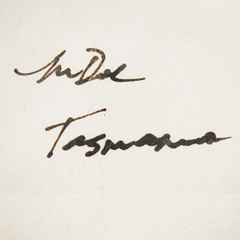 In December 2014, we added nineteen topics to Australian Potters’ Marks. (I tried to add a twentieth, but was distracted by champagne.) Many of these topics are for Tasmanian potters thanks to a new member who frequently visits the Salamanca Markets. A pot impressed Rutherglen Pottery surprised us by turning out also to be from Tasmania.  From my own collection, I added examples of works by Tasmanians Patrick Collins, Margot Manchester and Marilyn Raw. Peter Deck, who lost most of his large collection of pots in the 2013 Dunalley bushfire, was able to provide me with images of two pots for his topic that were returned to him by his cousin.  Amongst other new topics is one for Allan Lowe who began potting in 1929 and continued to practice well into the second half of the twentieth century. His son Peter Lowe also made pots signed with an incised ‘Lowe’. These are sometimes attributed to Allan so it has been good to make a clear distinction between the two styles and marks.

Here are the topics added in December 2014: