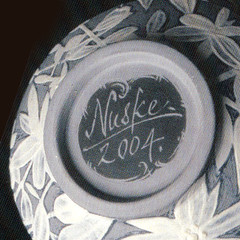 In February 2015 we added 12 new topics, not a bad result for a short month that continued wet into the bargain. Between mowing and edging our rampant lawn, I was prompted by member 10kazam to add a topic for Sturt Pottery. We already had topics for the ten heads covering the period from 1953 to 2009 but not for the pottery itself. By coincidence, David and I took a quick run up to Mittagong last week to see the “Of National Significance” exhibition at Sturt. While there, we invested in a bowl by Simon Bowley, who is the current studio pottery leader, enabling me to bring the Sturt Pottery topic up-to-date. We also bought a bowl by the Swiss potter Stefan Jakob. He makes frequent visits to  Australia and so merits an entry in Australian Potters’ Marks. During the month, we acquired two pots from the early 1980s by Bruce Anderson. In a fit of absent-mindedness, I spent several hours creating a topic for Bruce Nuske, falling in love with his teapots in the process.

Here are the topics added in February 2015: