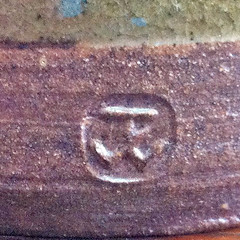 In March, I finally bought a copy of Janet Kovesi Watt’s Perth Studio Potters : the first 50 years 1957 – 2007 (Cottesloe, Western Australia Perth Studio Potters, 2009). This is a detailed history of the club which began its life in 1957 as the Perth Potters’ Club and is still going strong.  The book references over 200 names of potters who were members of the group in its first fifty years including office bearers, teachers and exhibitors. I’ve listed these in the Perth Studio Potters entry and added links for the 35 members who now have their own topics in Australian Potters’ Marks. (More information on any of these potters is welcome at any time.)  As well as significantly updating the Perth Studio Potters entry, we added 17 new topics in March. There were a number of new finds and mysteries solved, and we completed entries for all members of the Halpern family.

Here are the topics added or substantially updated in March 2015: