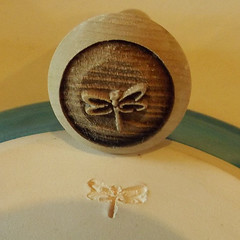 In October, we added 22 topics. These are an interesting mix of the old and the new. Elke Australia is often mistaken for Ellis but deserves a topic in its own right and we now know quite a bit about it thanks to research conducted by the Rameking. Jan Gluch’s work is sometimes attributed to his son Ivan and this has now been redressed in a Jan Gluch topic. We have been able to document John Pigott’s marks with the help of John Blaine who owns a number of his works. We also added a topic for the Mildura potter Doris Evelyn Ezard after  her story was discussed on the Australian Pottery group on Facebook. Among newer potters is Marina Pribaz whose work David and I found in Melbourne during our winter break and Clare Urquhart whose mark was illustrated in the Journal of Australian Ceramics 52/2.   The title group for October is Valley Potters Inc. The Dandenong Ranges Ceramic Group which opened its studios to the public last weekend has some members in common with Valley Potters Inc. so we have created a topic for this group as well. We welcome more information about the members of both groups and their marks.

Here are the topics added in October 2015: