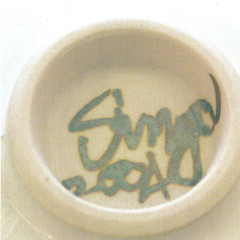 In November 2016 we added 21 topics to Australian Potters’ Marks and updated Lue Pottery with some early impressed marks not previously recorded. There is a slight bias towards the ACT this month, with potters like ann Ingwersen, Cheryl Kruger and Esmee Smith who all practiced in Canberra for a time. Several quite large businesses are represented with Austware Pottery and Monkeys of Melbourne, which still has a Facebook page for collectors although the company ceased operation in 1999. We also have an entry for Kym Faehse who worked for Monkeys of Melbourne as a brush hand in the 1980s. From South Australia we now have entries for David Pedler and his mother Barbara, also a potter. Facebook gave us examples of the work of several potters including Bevan Mills of Bridgetown Pottery in the south-west of Western Australia. (Incidently, I was born in Bridgetown and still have relatives living there.)

Here are the topics added or updated in November 2016: