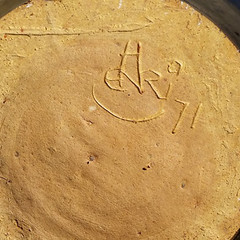 In December 2016 we added 11 topics to Australian Potters’ Marks and updated 6. Among the new entries are two with work that is not marked – Bill and Shirley Sangster of Phoenix Pottery and Therese Van Der Aa. We will update these entries if marked work comes to hand.  Other new entries include Graeme and Shirley Howard’s Grashir Pottery (it took us a while to realise where the name came from). We were pleased to find examples of work by the South Australian potter Henri Luijckx and to have his mark confirmed by his family. Updated entries include Lorraine Dinan’s Wallan Pottery. She signs as L. Dinan and it took  us a while to confirm her  first name. Also this month, we farewell Peter Travis, who passed away on Monday 28 November 2016 aged 87.

Here are the topics added or updated in December 2016: