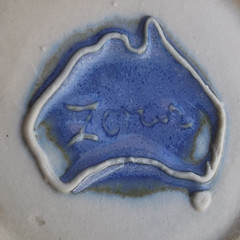 During March 2017 we added 7 new topics to Australian Potters’ Marks. Barbara Connell had an entry in the 1982 directory. Facebook has now provided us with an incised example of her mark.  Unusually, June O’Dea practiced in Queensland and the ACT before giving up pottery and returning to Queensland in 1996.  Other potters identified in March include Anne Olding, Ruth Petersen with her relief frogs, Vincenzo Ricci and Zoran Pottery.

Illustrated: Zoran impressed in a map of Australia.

Here are the topics added or updated in March 2017: