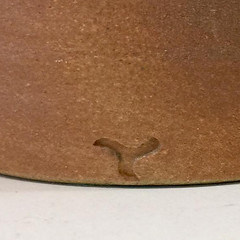 During June 2017 we added six new topics to Australian Potters’ Marks and updated three more. The new entries include Lynne & Mark Heggie (Mark is Bruce Heggie’s brother), Marlene kilkenny, Joseph Edwin Leech, Luxon Pottery, Faye Saunders and Pat Walker of Paw Pottery. We already had an entry for Therese Van Der Aa but our only example was unmarked. We now have an example of her impressed ‘T’ mark thanks to a member of the Australian Studio Pottery Collectors’ Group on Facebook. The other two updated entries both deal with Mark Reid’s early association with Kairi Pottery.

Here are the topics added or updated in June 2017: